Particular attention should be devoted to the sculpture The Woodman, which relates to the historical memory of the location itself, rather than Lithuanian folklore. The sculpture is framed by two old beech trees planted at the beginning of the 20th century next to a stone pyramid which was the focal point of the Hilly Promenade (the monument itself was destroyed after World War II). The stone pyramid was dedicated to Paul Bock, forestry advisor and Chief Forester of East Prussia. A member of the resort’s board, Bock greatly contributed to the design of Juodkrantė’s forest promenades. TheWoodman stands in dedication to dune rangers – locals of Neringa or neighbouring regions who were held in high esteem for their hard work planting on the dunes of the peninsula during the 19th and 20th centuries. 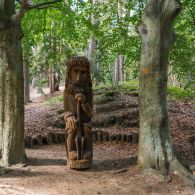