Burning of the Last Witch

The sculpture known as The Burning of the Last Witch, carved in 1981, takes us back to the Dark Ages. According to historical record, various sentences and penalties were used in different cultures at different points in history to punish those deemed to be involved in witchcraft – starting with imprisonment, execution by firing, hanging, drowning… However, during the Middle Ages, burning was often favoured when executing people (most often women) for this particular crime. Witches were firstly accused of Satanic association, and for that the most appropriate type of sentence was execution by burning. It is believed that the tradition of the witch hunt was not as severe in Lithuania compared to other European countries, however, the ghastly medieval tradition has its reflection in Lithuanian folklore too. 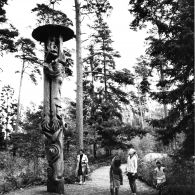