Devil on a May Outing

Compared to other mythical creatures, the devil of Lithuanian folklore is portrayed very widely in many different situations: devils appear in almost every genre of narrative folklore. This devil is a mythical creature that likes to stay very close to humans – he is always around people, sometimes even dwelling somewhere close by. Very often the devil lives right next to someone and appears instantaneously if ever that person is in need of any help. In Lithuanian tales and legends, the devil pays a man back a hundredfold for each penny or sign of respect offered to him. Sometimes, however, quite the opposite is also true – the devil appears as the most terrifying and the most dangerous mythical creature. At the same time, the devil of Lithuanian folk mythology has hardly any mystery about him, he is almost fully devoid of any supernatural character, and consequently, people do not even try to avoid him as there is not much to fear. There is a somewhat unceremonious and even friendly aspect to interactions between humans and devils. This aspect of human-devil interaction is portrayed in a group of sculptures depicting musicians and couples dancing. Among the human figures, we can see the devil twirling away. He can be recognised by a certain feature. 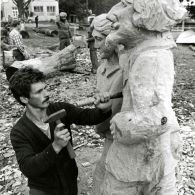 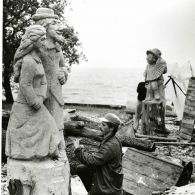 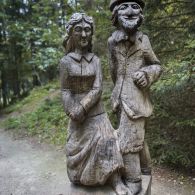