The sculpture Lucifer stands on the edge of the slope of the Spruce Valley and portrays the devil in a manner characteristic of Lithuanian folklore. The Spruce Valley forms a natural forest amphitheatre along the lines of the parabolic dunes, much like the Hill of Eve. Starting from the end of the 19th century, this was a place where crowds (up to one thousand-strong) of Lietuvninkai (Prussian Lithuanians) from across the lagoon would gather to celebrate Midsummer. They would pray here, shrouded in the mysterious atmosphere of the Spruce Valley. This tradition reached its peak before the First World War but continued well into the interwar period.

The sculpture of Lucifer is the first in the Hellish Series of devils and witch characters. The origins of this kind of sculpture clearly stem from the tradition of “mask art and humorous folk sculpture”, as pointed out by an art critic who visited the exposition just after its opening in 1979. The exceptional nature of the Juodkrantė sculpture park directly relates to local nature and lifestyle – the artistic choices that are appropriate here would not be suitable or understandable should the sculptures be placed anywhere else. The Hellish Tale, for instance, will suit the mood of a holiday maker looking to be surprised. 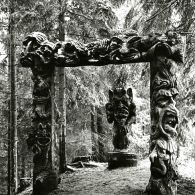 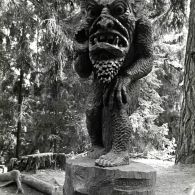 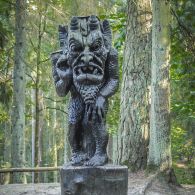